Kodak Black has been put on house arrest after his recent arrest in Florida with 30+ Oxycodone pills. 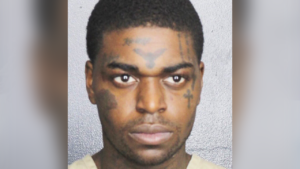 According to a report by VladTV, Kodak appeared in federal court on Wednesday 20th and faced punitive measures for violating the terms of his supervised release.

Kodak’s prison sentence was commuted by Donald Trump in 2020, but he was still under supervised release items until 2024.

He was picked up on July 15th of this year in Broward County, Florida in posession of more than 30 Oxycodone pills, which his management claim were prescribed to him after he was shot earlier this year. He had 2 criminal charges filed against him and was released on $75,000 bail.

In court Wednesday Yak was ordered to pay a $225,000 surety bond & to submit to drug testing, as well as agreeing to be fitted with a GPS ankle monitor and placed on house arrest. He will have to give 48 hours notice to leave his house for perfomamnces, and will have to ask his supervising officer for permission to leave on any other occasion.